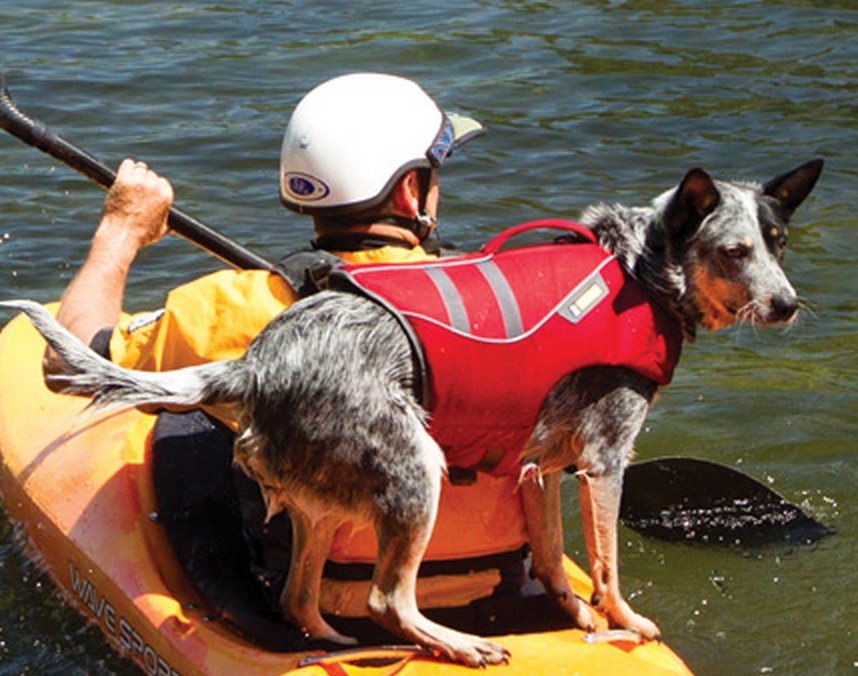 Yes, it is perfectly safe for your dogs to swim in the lake as long as you have a dog life jacket to ensure that they don’t get tired and are kept safe in the water.

While a few dog breeds are not particularly fond of the water, it is more likely that your canine companion would literally jump at the chance to cool off in a lake on a hot summer day.

Whether they just dip their paws in for some mild splashing fun, or take flying leaps into the deep, most dogs do enjoy playing in water in one way or another. But is it safe to allow our furry friends to swim and play in lake water?

Occasional visits to the lake often will not yield any negative consequences, but to be a responsible dog owner, it is important to be aware of the kinds of dangers that can sometimes lurk in our lakes.

Many lakes naturally contain algae, but of particular concern to dogs is the bright, blueish green variety that often gathers on lake surfaces. This type of algae can produce toxins that can have a wide range of harmful effects on your pooch, from skin irritation to seizures to liver failure.

Simply swimming in algae covered waters may cause the more minor symptoms, while oral ingestion of the toxins can lead to canine death in the absence of immediate veterinary treatment. Blue-green algae is most often seen during the warm weather of the summer months which is unfortunately often the best time to enjoy the lake.

Lakes may also contain parasites that pose a health risk to both humans and animals. When dogs swallow lake water, whether intentionally or not, it can allow waterborne parasites into their digestive systems.

The most common symptom of this kind of parasite ingestion is diarrhea; which can be unpleasant for both you and your dog! Certain microscopic parasites, called protozoan parasites, can even enter a dog’s brain when just a tiny amount of lake water is inhaled through the nose.

Wearing nose plugs can help prevent parasitic infection in humans, but successfully getting your dogs to wear nose plugs for swimming is highly unlikely.

Once the brain is infected by protozoan parasites, there is no known medical cure, and very few survive such an infection. Unfortunately, these parasites are more commonly found in lakes than other bodies of water because they thrive in warm, freshwater environments.

Lakes also frequently contain a variety of bacteria, including the well-known E. Coli bacteria. Bacteria at normal levels are unlikely to cause significant problems to either human or canine lake swimmers.

However, on occasion, bacteria levels can spike, and accordingly the likelihood of developing bacteria related symptoms increases as well. Swallowing lake water that contains elevated bacteria levels can result in gastrointestinal symptoms such as abdominal cramping and diarrhea.

Salmonella, another bacteria more widely-known for its presence in under-cooked chicken, has also on occasion been found in some freshwater lakes. The effects of Salmonella exposure are also primarily gastrointestinal symptoms.

Treatment of a dog with mild to moderate bacterial exposure-related symptoms often involves simply making sure that the dog does not become dehydrated. However, more severe exposure and symptoms may require veterinary care and prescription antibiotic medication.

Rotting wood and wet soil, both of which may exist near recreational lakes, create another hazard to be aware of. When these conditions happen to coexist in an area lacking direct sunlight, there is a likelihood that a type of mold particularly dangerous to dogs could be present.

Mold infection in dogs most often occurs through simple inhalation of mold spores in contaminated soil or in the air. Skin lesions, fever, and sudden weight loss are the most common signs of mold infection.

Treatment usually involves prescription anti-fungal medication and can in many cases result in complete recovery, but only if the treatment is aggressively and promptly administered.

The reality is that there are additional dangers lurking in lakes that are unfortunately the result of human actions. Lakes in residential areas or near golf courses may have been treated with powerful chemicals to kill unsightly and smelly algae blooms.

Although this neutralizes the threat caused by the algae, what remains are chemicals that can just as easily make your dog ill. Even lakes that are not chemically treated directly may still suffer from dangerous chemical pollution simply by being adjacent to any properties that use fertilizers or pesticides.

Rainwater can cause these chemicals to end up in the lakes, over time leading to chemical concentrations that are dangerous. Lakes near mines or manufacturing plants are also likely to contain pollutants created as byproducts of the products being mined or manufactured.

While minimal lake pollution might only cause your pup to suffer temporary skin irritation, higher chemical concentrations can lead to severe digestion or breathing difficulties.

Another man-made threat to dog safety that is sometimes found in and around lakes is lost or abandoned fishing gear. A sharp fishing hook that has been left behind can painfully pierce a puppy paw in, or around the shores of a lake.

Due to the barbs present on many types of hooks they can be very difficult to remove from a dog paw and may require veterinary assistance. A prescription for antibiotics may also be required, to prevent the possibility of infection.

While a dog may inadvertently step on a fishing hook that is camouflaged by its surroundings, a dog might intentionally go after an abandoned hook as well. For example, fishing hooks, particularly those with remnants of bait remaining, can smell tasty to your pet.

Unfortunately, it can become dangerous very quickly when a dog swallows a fishing hook. While the dog’s digestive system is trying to pass the hook, the hook will likely damage the intestinal tract.

In such a situation, when it is known that a fishing hook has been swallowed, prompt surgical removal is almost always necessary.

Wild animals that live in or near lakes can also pose a risk to your dog. Raccoons are known to regularly visit small lakes and happen to be one of the most common carriers of rabies.

A bite from a rabid raccoon can cause disorientation, paralysis, seizures, and even sudden death in other animals. Mosquitoes and ticks also often reside near lakes.

Mosquitoes can carry heartworm, which untreated, can be fatal in dogs. Ticks also frequent areas near lakes and can carry Lyme disease which dogs can contract when bitten. Lyme disease in dogs can result in a rash, stiff and swollen joints and breathing difficulties.

Lyme disease can even be fatal to unvaccinated dogs. If you are visiting a lake in Florida or its bordering coastal states, you need to be aware of yet another threat specific to those areas.

While alligators may be found in almost any body of water in or around Florida, they are most prevalent in freshwater rivers and lakes. Alligators often lie in wait just below the surface and can attack swiftly, and there is little doubt that they are a threat to your pet.

In fact, dogs fall victim to alligator attacks much more often that humans.

So, is it safe for dogs to swim in lakes? Sure it is. As long as you ensure that your dog has a life jacket, a water bowl and maybe some toys to keep them entertained while out on the lake.

Some lakes quickly go from shallow to deep with little space in between. While many dogs take to the water naturally, some dogs are not good swimmers at all. Thousands of family pets are estimated to drown each year in the United States.

For this reason, dogs should be introduced to the water slowly, and not be allowed to jump right in until it is clear they are competent swimmers. In fact, canine life jackets are made just for those dogs who need more assistance in learning to swim.

Dog breeds with large heads, large, heavy muscles, and short legs most often tend to be weak swimmers. If your pup fits this description you may want to provide him with a dog life jacket and ensure that he is wearing it whenever you think that your dog may be around water and especially when you first introduce him to swimming; at least until you are certain he no longer needs it.

Another step you can take if you believe your dog might not be a natural swimmer, is to learn canine CPR. Hopefully you will never need to use it, but the peace of mind that comes along with being ready and able to save your pet if necessary is priceless.

So, Is it safe for dogs to swim in lakes?

Your canine companions may get great joy from splashing around to beat the summer heat, but doing so in a lake is not without risk. While many lakes may have few or none of the dangers discussed, these dangers are often hidden and once discovered, it may be too late.

Whenever possible, try to find a location in your area that is set aside for safe dog swimming. Or better yet, invest in an inexpensive kiddie pool and you can control exactly what’s in the water your pooches play in, and worry less about their safety.

Is It Safe For Dogs To Swim In The Ocean?

Is It Okay For Dogs To Swim In Chlorine Pools

Boating with Dogs: Don’t Leave Your K-9 Friend Behind!

Introducing A Dog To Boating On The Lake

Which Foods Can Dogs Eat And Not Eat

At What Age Can You Teach A Puppy To Swim?

How To Teach A Dog To Swim In A Pool

How Do You Introduce A Dog To Water?

How Do I Get My Dog To Not Be Afraid Of Water?

How Can I Get My Dog To Like Water?

Is It Safe For Dogs To Swim In The Ocean?

Is It Okay For Dogs To Swim In Chlorine Pools

Boating with Dogs: Don’t Leave Your K-9 Friend Behind!

Introducing A Dog To Boating On The Lake

Which Foods Can Dogs Eat And Not Eat

At What Age Can You Teach A Puppy To Swim?

How To Teach A Dog To Swim In A Pool

How Do You Introduce A Dog To Water?

How Do I Get My Dog To Not Be Afraid Of Water?

How Can I Get My Dog To Like Water?